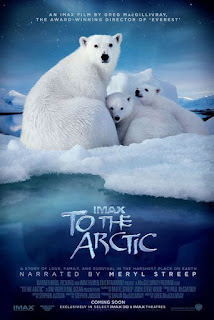 To the Arctic is a movie I knew my wife Daisy wanted to see. She loves anything related to polar bears. I had it on my "to watch later" list, but Daisy insisted we watched it soon. It's a documentary movie about animals in the arctic with narration by Meryl Streep. 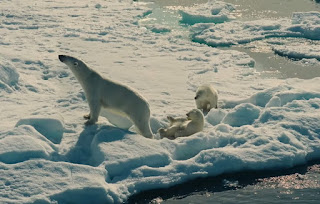 The main animals (obviously) are a mother polar bear and her cubs. They tell of her story in the arctic along with other polar bears. Where the ice keeps melting too soon and takes longer to freeze back up. Which makes finding food harder for the polar bears. 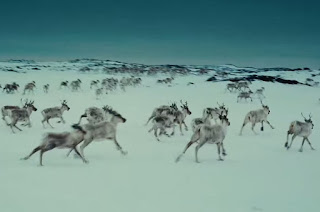 But they aren't the only animals who struggle to live in the cold lands. They show walruses with many mothers who look after their babies. They also follow a herd of caribou (reindeer) who travel to a safer place to give birth. 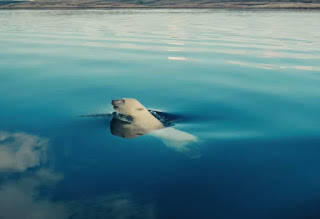 We had seen a previous film with a similar story called Arctic Tale which was much better. This one was too boring, even Meryl Streep narrating might put you to sleep. It's not a very long documentary, and they never seriously focus on any of the animals to make you care for them. It touches on the climate change issue, but with weak enthusiasm.

How sweet it was of you to take Daisy quicker than you really wanted to go. You are making a fine husband, dear Adam...and I'm still laughing over her eating all the grapes (?) and didn't even ask you. hahhaa...too cute.
I don't normally like documentary movies so I know I would like one you rate as D+. Thanks for the heads up on it....
xo

Too bad this didn't turn out better.

I haven't seen this one, but I am enjoying another one that I'm watching about them. Good on you, for taking your wife.

Must look for that movie...

Too bad this wasn't good. Polar bears are fascinating.

Too bad it didn't rate higher.

Man, this was on my watch list too. I guess I'll be skipping it!