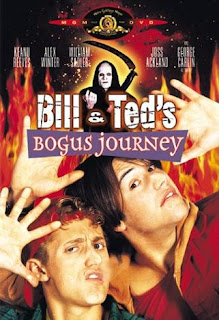 I had seen Bill & Ted's Excellent Adventure last year and liked it. I wasn't too terribly impatient to watch the sequel, Bogus Journey. I heard it wasn't as good, but a co-worker told me that even though that may be true, it's still very comparable. Turns out he was right. 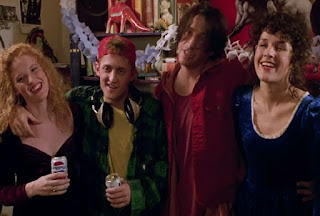 The story begins some time after the events of the first movie. Bill and Ted are happy, but they haven't made their band famous yet. In the future, a tyrant takes one of the time traveling phone booths and sends two evil robots who look just like Bill and Ted back in time. One of their first goals is to ruin their lives, like ending the relationships between them and their girlfriends. Their other mission is to erase them from the history of the future. 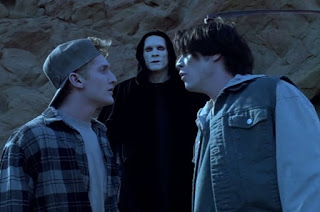 The evil robots are successful, and throw Bill and Ted off a cliff. They wake up dead, and with the Grim Reaper. They aren't thrilled about being dead, and they also know they have to stop the evil Bill and Ted from causing chaos back on Earth. So they have to challenge Death to get their lives back, and save the future. 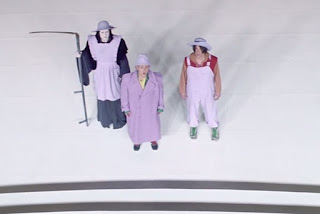 Bill & Ted's Bogus Journey is about as good as the original. I'm glad they didn't revisit the time-travel thing terribly much as it would have made it seem too much like deja vu. I thought the first film may have been one of the stories that couldn't have a good sequel, but I was wrong. Some of the jokes aren't as funny as the first, but it's very original and I enjoyed it.

Never watched that one

I've always liked Keanu in the movies but this one I just didn't find funny.

I saw the first one when it came out. Don't think I'd be interested in a sequel.

I think I've seen this a long time ago...so long I can't even remember it anymore:P

And OMG! Fantastic news about Kit, eh? That's gotta be a sign!

I enjoyed it for what it was

Umm...yeah...I would agree with your co-worker. Both movies were in the same quality range. I didn't really see the first one as a masterpiece, but for what they are, they both succeeded. You could watch both in a row and not feel that you've lost quality between #1 and #2.

Haven't seen this movie in ages.

didn't see this one