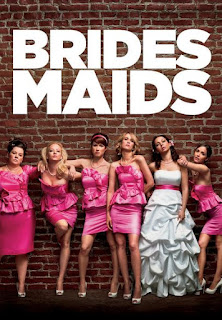 I had heard of Bridesmaids back in 2011, but never gave it much attention. I thought it was a chick flick, but it's more a comedy that men might enjoy more than women. It's one of the movies made by Judd Apatow who's known for a lot popular comedies. 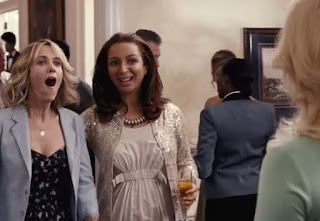 The story does sound like a typical wedding movie, where a woman named Annie Walker gets asked by her friend Lillian to be her maid of honor. Though Annie is at a tough time in her life. Her bakery failed, and her love life is a mess. Though she meets the rest of the bridesmaids including Lillian's most recent friend Helen who is wealthy and beautiful. 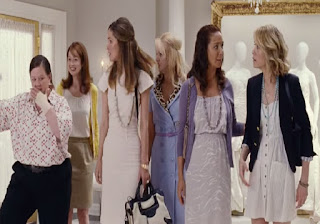 Helen and Annie don't get along, much due to Helen's pursuit of trying to oust her from her role of maid of honor so she can take her place. This leads to bad moments due to either bad luck or sabotage which may lead to an unhappy wedding party. 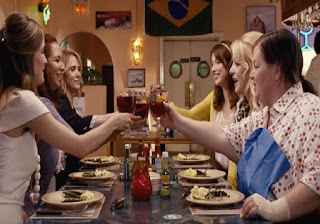 Overall Bridemaids wasn't as good as I had heard, but it's a great comedy. I also waited until after I was married to watch a movie about weddings. Even though the actual wedding in the movie isn't the serious focus, you see things in a different light. I know Melissa McCarthy got a lot of praise for her role in the movie, and yes she is very funny. I think the movie would have been better if Annie wasn't so darn pathetic.
Score: B+
Posted by Adam at 2:00 PM

I never could get all that excited about this one.

You may want to sit down, Adam for what I've got to say may come as a shock: your friend Blue loves chick flicks. Why I hear you say... Well, because there are so many chicks in them, that's why. See, it all makes perfect sense. Plus... chick flicks offer a great opportunity to unravel the greatest mystery of the universe: women.

I haven't watched this one, I don't usually watch comedies.

I really did love this movie, but you're right. Not a big fan of Kirsten's character but Melissa...she made that movie!

It was a different kind of movie, I'll give it that! I liked it...but I could have done without the puke scene. That kind of humor takes no imagination and is just disgusting.

I can tolerate a lot of gross stuff, but I looked away a good bit during that scene

I never would have guess, Blue! You can be mine and Dezzy's movie date from here on out. We love those chick flicks ;)

I thought is started out funny, but by the end, felt like they were trying too hard. I'd give it a B-.

One of my favorite Melissa McCarthy roles.

I think I would like this movie, thanks for sharing!

I haven't seen this, but it sure looks like fun.