Fact of the Day: Burmese Democracy 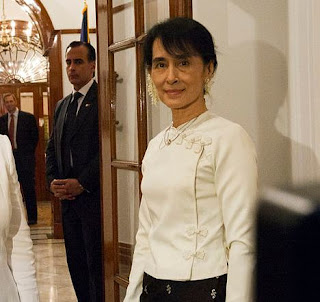 In the Asian country of Burma (also known as Myanmar), the country had been ruled by a military dictatorship known as the junta since a coup in 1962. It seemed that the military junta gave in to democracy in 1990 by giving other parties the chance to have power. A woman named Aung San Suu Kyi led a pro-democracy party to win a super-majority in that election. The military-junta ignored the results, so instead of becoming Prime Minister, Aung San Suu Kyi was eventually put under house arrest until 2010.
Posted by Adam at 12:00 AM

I have always admired her courage and perseverance. I wish we had more leaders and mentors like her.

Was aware of all of this. But good to read it again.

Events in this country are SLOWLY improving.
An improvement is far better than a backward step.
Colin

Win and get house arrest, quite the prize

From what I've read, she's a courageous and admirable woman who cares deeply about her country.