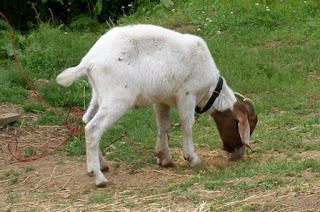 During the 1945 World Series, the Chicago Cubs faced the Detroit Tigers. A man named William Sianis took his goat to one of the games of the World Series, but was told to leave after it had bothered a lot of fans watching. When he left he said "The Cubs ain't gonna win no more" and many fans believe he put a curse on the team. As they have never won or gone to the World Series ever since.
Posted by Adam at 8:44 AM

Email ThisBlogThis!Share to TwitterShare to FacebookShare to Pinterest
Labels: Baseball, fact of the day

haha blame a curse for them just sucking, easier way out.

Never piss off a man with a goat.

That's what you get when you insult someone's goat :)

Better than to admit the team wasn't good enough to win a World Series.

so don't mess with goats!

Oh my word, that's a fascinating story Adam. Never heard that one before.

Interesting, never know what we will hear next

And every year my husband still roots for them to win. I just don't think it's gonna happen. Thanks, goat.

But as you reminded me... who knows? This could be the year if we are to believe Back to the Future.