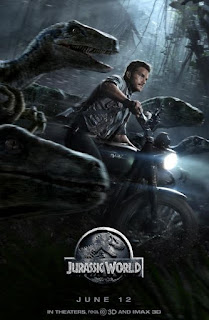 I remember when the first Jurassic Park came out when I was just five years old. I don't think I saw it in theaters, but I probably watched it with my brothers when the VCR version came out. I didn't like Jurassic Park II so much that I didn't give a second thought about seeing the third movie. This new movie somewhat ignores the events of the two original sequels, but is it any good? 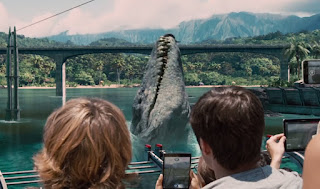 Over twenty years after Jurassic Park closed, a new park opens on the same island called Jurassic World. It's far more advanced technologically than the old park, and features even more dinosaurs. Over the years people have grown somewhat bored of the same dinosaurs. So some of them were genetically modified to be bigger and badder than their natural forms. 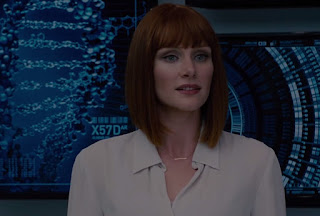 Claire Dearing is the operations manager for the whole park, and asks a man named Owen Grady for help on a new hybrid dinosaur called the Indominus Rex. It's far stronger than a T-Rex, and uses genes from other dinosaurs to be quite the monster. Owen realizes that the mighty dinosaur has escaped, and chaos unfolds especially for Claire as her two nephews are guests at Jurassic World and nobody knows where they went. 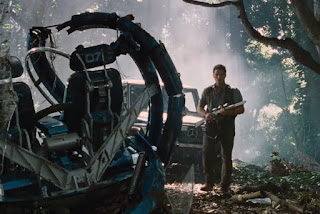 I figured I would like Jurassic World, and it was a bit better than I expected. Chris Pratt was amazing as Owen Grady and I thought they did a good job with the teamwork with his trained velociraptors. I also liked the evil Indominus Rex and its high intelligence being its greatest strength. It does feel a bit too similar to the original (though it's obviously the intention) and some moments are very predictable but I was certainly not disappointed with this one.

I'm waiting to rent it.

Looking forward to seeing it.

Looks great, I have t watch it, if you recommend it;)

Yeah, it was pretty similiar to the first.

I have plan to watch this!

My daughter loved it!

I watched this and thought it was decent enough. I still like the first one the best.

I can't wait to see it. the first one was awesome.

Glad you liked it. I thought it was okay, nothing new, easily forgotten.

Loved this movie. That battle scene in the end was just epic, and I loved that scene with Bryce lighting that torch in front of the TRex as an homage to the first movie:)

I'd like to see this one as soon as I can rent it.

I thought the special effects was amazing.

Watch megashare9 online free now. In the new movie, the villains created the Indoraptor with propaganda and propagated it as a weapon in the war. However, this creature exits and scares horrifically. Indoraptor's chasing, hunting prey is the highlight of the film's action.

The 10-ton triceratops are familiar in the series. Despite its scary appearance, they are gentle and herbivorous, using only their horns to fight off hunters (usually T-rex). In life, this is one of the species most fossil found.

The creature is a carnivorous dinosaur that has just appeared in the last two films, with a pair of small horns called Carnotaurus. With a small skull leading to a strong bite, this species is not strong enough to attack large herbivore dinosaurs. The Carnotaurus preyed on small prey because of his strong legs and high speed. In the Fallen Kingdom, a Carnotaurus attacks Owen's team when the volcano erupts but is destroyed by T-rex.