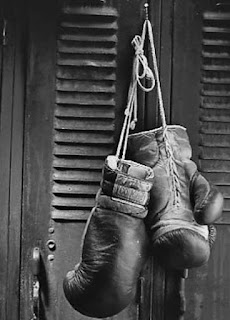 In 1949 a skilled boxer named Gus Waldorf decided to be in a special boxing match. Except his opponent was not a man, but a full-grown bear. They muzzled the creature and covered his claws with boxing gloves. Despite the handicap, the bear eventually was the winner of the match.
Posted by Adam at 12:00 AM

I feel bad for the bear, but I'm glad the bear won.

Not what you'd call the brightest of persons.
Am I surprised - NO.
B J Hunnicut M.A.S.H. 4077 Australian Medical Corp.

what an utter idiot... hope the bear ate him for dindins after it

Good grief, that certainly wasn't the brightest thing to do.

Must have took one too many hits to the head already

Good for the bear. I'd think they'd be better at wrestling than boxing.

I...I....goddamnit people...I'd be interested in knowing how long this guy lasted against a bear. Can't imagine it was very long.

Wow, what an idiot.

what an awful thing to do!

Good for the bear. I hate that humans torment animals this way.