Fact of the Day: Faux Witch 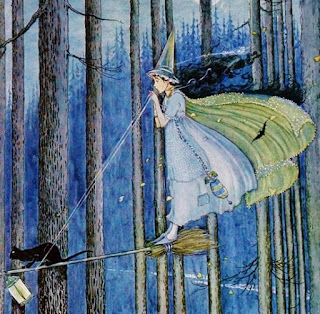 In the 17th century, it wasn't uncommon to hear of women who were accused of being witches. One of the most famous cases, the Salem Witch Trials may be due to ergotism. It's a disease that occurs after consuming bad rye or other cereals. It can cause bad physical pain along with mania, delirium, psychosis, and melancholia which affect the mind. Most of the same symptoms were described in the women accused of witchcraft.
Posted by Adam at 12:00 AM

What they did to these poor women was very, very tragic.

A logical explanation, too bad the idiots in the past never got that

it would seem most people have ergotism every day

The terrible things humans do. And the silly things they believe.

Wow I didn't know any of that and I toured Salem!

My goodness me..something else I have learned.

Very interesting, I had never heard of this before. I had heard that it was due to some greedy people who wanted their lands and basically made up outlandish stories. A bit of both maybe.

I'm sure throughout history a ton of people with a genuine sickness or a mental illness were hurt or killed because of others misunderstanding what they had. Very sad.

Misunderstandings and ignorance of things have caused a lot of terrible things to happen.

I am so glad I wasn't a woman back in those days! Such terrible things done to them by horrible people!