Fact of the Day: President Hanson 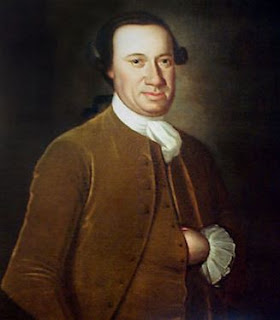 John Hanson is often wrongly called the "first president" of the United States as he was the first person to be elected President of the Continental Congress. The position was largely ceremonial, and not related to the later office as the Federal Government had no executive branch at the time. And the people did not vote on who got the role either. Despite the lack of real power, Hanson found the work tedious and considered resigning after a week.
Posted by Adam at 12:00 AM

Well that sounds/reads sensible.
You could hardly be considered a sovereign "President" before becoming
a sovereign nation. Thus George Washington is the rightful holder of the
title as first President of the USA.
Colin (Brisbane.Australia)

Guess he wanted power and not the tedious stuff

Some people have and some don't to be a leader..

Has nothing to do with those three little Hanson Mboop sisters, I presume....

Can't blame the guy. What's the use of that title without the power:P

I'm glad he's not technically our first president. He looks like kind of a wiener.

Now that's a fascinating bit of history that I didn't know about. Thanks Adam!

That last statement was quite amusing !

Wow! And I don't think I've even heard of him.

Never even heard of the man....and I have to say I've had jobs before that I wanted to quit after the first week, too. LOL