Fact of the Day: Soviet Poland 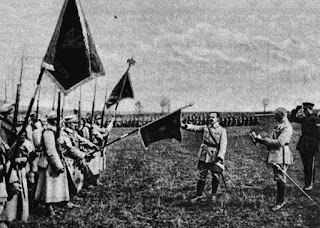 While it was mainly to protect a lot of modern-day Ukraine, Poland defeated a Soviet Russia (before it became the Soviet Union) in the Polish-Soviet War. Their victory kept the Soviets out of Poland and the majority of Ukraine. However about two decades later, Poland was crippled by the Germans from the West and the Soviets returned to the East. The Soviet Union had essentially controlled Poland at the end of the war, but Stalin promised the United States and the United Kingdom that Poland would remain independent and democratic. It didn't take long for communists to take over the government and remain a Soviet puppet until 1989.
Posted by Adam at 12:00 AM

Yep - about 1 minute after the assurance!

And what about the Polish uprising (Wawsaw) in WW2 and the Soviet
army stood still on the other side of the river ( the Vistula) and did nothing.
And then when the city was virtually razed to the ground by SS troops
under the maniac SS Brigadefuhrer Jurgen Stroop did the Soviets move
in and take the spoils!
The only good aspect was that Jurgen Stroop was tried and hung at the scene
of his blood thirsty crime.
B J Hunnicut and company

A lot of history on that...

I don't know much about Polish history, but from what I've read....horrible times during the communist reign, which goes without saying, I guess....:(

It's so weird for me to imagine all those horrible things happened so close to where I live!

but the Soviets were also the ones who freed all of those Catholic countries from the Nazis and died in tens of millions while doing so... but they still hate them because they're Orthodox.... and communism wasn't at all that bad as your country tells you ... they depict is as a villainous regime, but the truth is many countries flourished under communism, my ex country Yugoslavia too

Say one thing and do another, the way of those in power

Poland has had a long sad history.

REALLY????
I must have read different history books, seems that the Soviets
got rid of Catholic clergy to the Gulags by the train loads!

Tito certainly did.
And look at the mess after he departed.
B J Hunnicut