Fact of the Day: Stalin's Wife 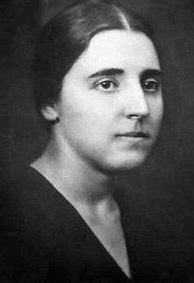 Joseph Stalin's second marriage was not a totally happy one. His wife Nadezhda Alliluyeva had a public dispute with him and then the next day she was found deceased. While it appeared to be a suicide, many think Stalin murdered her. Regardless of what really happened, Stalin told the world (and his own children) that she died of appendicitis.
Posted by Adam at 12:00 AM

He had her like millions of others murdered - end of subject.
B J Hunnicut

yes it was strange story

I had a cat called Nadezhda.

Wow. I guess it's a bad idea to marry a dictator!

my vote goes to him doing it too

Yes, I heard that he had her killed..

Who could ever believe anything Stalin said. He killed more of his own people than Hitler.

You just never know with him. He was awful.

Absolutely correct Stephen - By the millions.
I hope the idiot brigade read your comment.
Colin

One suggestion to you - fruit loop.
Go see a psychiatrist ASAP.
Colin

My goodness...he was a ruthless, mean man.