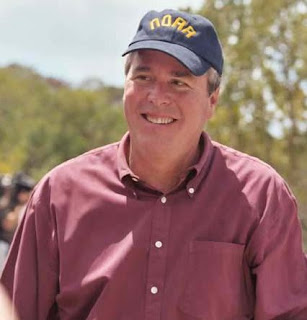 Jeb Bush has been the most pro-immigration Republican running for President, as his wife is Mexican-American and it's obvious he isn't racist towards Hispanics. But Jeb Bush recently used the derogatory term "anchor babies" referring to children born in the United States of immigrant parents who wished to stay in America. Jeb Bush said he was referring to Asians when he said that, and I just have no words for such strange politics. So Jeb wants to get the racist vote and the Latino vote? I'm sure he won't get the Asian vote.
Posted by Adam at 12:00 AM

Well he is a Bush!
Then today here in the Australian papers there was a report on
Trump in Alabama where the prominent sign shown was:
Jesus Christ, the Lord, and Alabama supports Donald Trump.
I can assure you the Australian journalist had a field day.
Like me, he didn't think that even Jesus Christ had a vote in the
USA elections! What a joke!
Trump as President - well there will be a surplus of empty Embassy
buildings along Pennsylvania Avenue in Washington, DC.
B J Hunnicut and the uncontrollable laughing Medics of the 4077

I ran across this bit of news that's been all over the place. I'd never heard of the term "anchor babies" before this.

The Republicans are alienating Blacks, Asians, women and the LGBT community. The angry old white crowd they are aiming at isn't a large enough section of society to get them the White House---I hope.

I'm a woman and I haven't been alienated by Republicans. GW Bush will always be a favorite president of mine .....I don't think Jeb has a snowballs chance....
Mr. Trump may not last another year and I get down on my knees every single night and pray with all my might that Hillary Clinton drops out of the race and NEVER resides in the White House again. God help us if she does.

Why am I NOT surprised?

Startling revelations!
1. God the world will blow up with anyone but a Christian loving, utterly corrupt, white and bible quoting male occupying 1600 Pennsylvania Avenue!
Well with JE Bush or even quicker with D Trump, the World will be blown up but I suppose with your "god" that Texas will be saved????
2. Funny you say/write you are a woman!! I thought the accompanying photo was of some old drag queen who was a leftover of the Sitcom " Dallas", but it is YOU - BJ !!!
3. However I do agree with you on one thing - Hillary has passed her "used by date". The World does not require "rule by name" Occupiers of the White House!
However with the likes of you praying the good Lord might all of a sudden be struck deaf!
Now go have a nice day "bj" and get blind drunk - ha ha.
B J Hunnicut of the M A S H team of 4077 ( No Texans allowed membership)

The Republicans seem to be very racist, perhaps those who vote for them are too. I can't believe I said that...hmm. I try to stay neutral with politics.