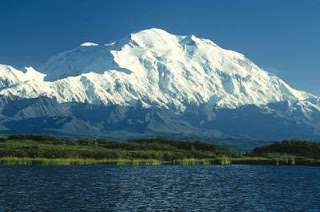 Mt. McKinley is the tallest mountain in North America, and just recently President Obama had "renamed" McKinley to Denali which was the name of the mountain before it was renamed to honor President William McKinley in 1917. While it doesn't make much of a difference, but I'm glad the original name is back. American history has too many examples of government leaders not giving a second thought to Native Americans.
Posted by Adam at 1:00 PM

I've always said Denali too. We have enough buildings and highways named after people.

I agree with this decision. The natives have been calling this mountain Denali for centuries.