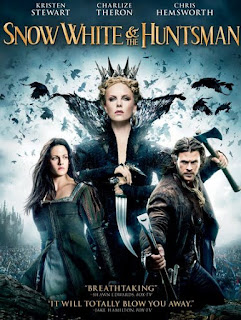 Movies about Snow White don't happen everyday, but I remember there were two back in 2012. One of them, Mirror Mirror was more family-friendly, but I saw it about three years ago and liked it more than I expected. The second is Snow White & The Huntsman which I had been curious about but this grimmer take was also hit or miss critically. 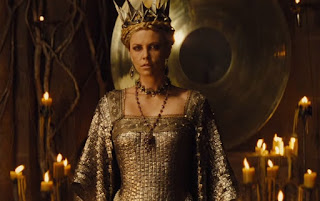 The story begins when Snow White is just a little girl. Her life doesn't go well when her mother passes away. Her father remarries, but his new Queen is (surprise!) an evil sorceress. She commits regicide and has her dark army defeat the forces loyal to righteous king before they know what's going on. Snow White is kept a prisoner until she grows up. But when the Queen decides to use magic to take Snow's youth (and her life), the young princess manages to escape from the castle and flees to the dangerous dark forest. The Queen needs Snow to gain eternal youth, so she requests a man known as The Huntsman (his real name is Eric) to find Snow White. Eric is not loyal nor does he trust the Queen, but when she offers him the chance to see his late wife again, he takes the job. Though he might get a change of heart when he meets Snow White. 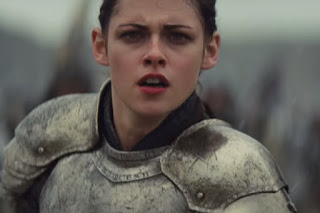 Is this movie better than Mirror Mirror? I don't think so, it's actually a dreadfully boring film with some of the worst acting I've seen in some time. The story is a twist on the classic fable, but even though a lot of the core story is the same, it just doesn't feel very Snow White to me. Like the Evil Queen is suppose to not compare to Snow's beauty, and while Kristen Stewart isn't exactly ugly, she doesn't compare to a gorgeous lady like Charlize Theron. This was the first major movie done by director Rupert Sanders which makes me nervous for the American version of Ghost in the Shell (which he is the director) which is to star Scarlett Johansson.

Bad or not, apparently they're filming a sequel to this right now. Chris Hemsworth is back but not Kristen Stewart.

I saw this and I have to agree that it certainly wasn't the best movie I've ever seen. And it had so much potential.

I was okay with it. I didn't see Mirror Mirror.

I rated this movie higher than a "D." perhaps a "C"

I actually loved it!

Hahaha....I do like this film coz I like Chris Hemsworth, but you're right. Charlize and Kirsten Stewart....there's really no competition there. I'm a Kirsten Stewart fan, but she was just atrocious here:(

Worth seeing once ! that's it.

Never saw it, but I am looking forward to the prequel!

Looks like you not like it so much, but really thank you for this post as wanted to watch this, but forgot. The main picture looks beautiful and I like Kristen, as I'm a fan of Twilight.
http://anna-alina.blogspot.com/

It was ok, nothing special though.

didn't see this one.

never saw it because I refuse to watch anything with that expressionless zombie lass Stewart.... the most horrid actress there ever was ... not counting Madonna :) and Julia Roberts