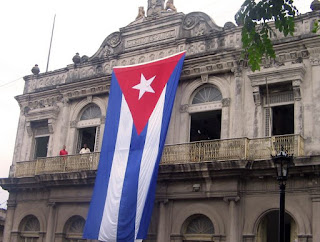 The United States and Cuba have been officially enemies shortly after Fidel Castro's communist government took over the country. There has been a trade embargo since, and Americans officially could not visit Cuba either. Now the U.S. and Cuba are becoming diplomatic again, which I think is good. This silly feud should have ended when the Soviet Union fell.
Posted by Adam at 1:00 PM

This is good news! Canadians have always been able to visit Cuba for vacations.

Long overdue. The more contact the Cuban people have with us, the more freedoms they'll demand.

Fortunately Australians like Canadians defied the US embargo on travelling to
Cuba.
The Far Right of US obviously lost a lot of money (corrupt) when Fidel and his
band ousted the extremely corrupt Batista regime. I had the dubious experience
of staying with friends in Lausanne, Switzerland in an opulent apartment blog
over looking Lake Geneva where Mme Batista owned the top floor with armed
bodyguards protecting here - I suppose the Praetorian Guard brigade of the Batista
regime.
I should imagine in the protocols of the re-established diplomatic agreements
there would be clauses regarding interference in the government of Cuba by the
US. I bet that galls the likes of ex-VP Dick Chenney and Co.
It will be interesting but doubful if Cubans would be able to visit the US due
to costs and poverty that prevails still in Cuba due to the economic sanctions.
However excellent to know that sense has at last prevailed.
B J Hunnicut M.A.S.H 4077 - Hawkeye Pearse and Radar O'Reilly heartedly
concur.

Always enjoy the topics and news you bring up. Always worthy of important feedback and conversations. Hugs...www.intheknowwwithro.blogspot.com

Yes, definitely long overdue. Canadians have been visiting Cuba all along; it's a beautiful country and the people are so friendly.