Ben Carson Implies That No Muslim Should Be President 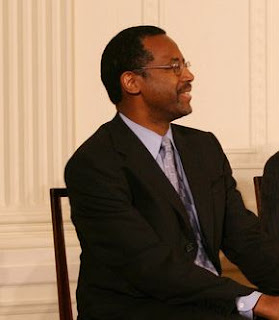 In a recent interview, Republican presidential candidate Ben Carson suggested that no Muslim should ever be elected to be President of the United States. He said that a person's faith should be consistent with the U.S. Constitution, and he believed that Islam was not. Except in a country where there is suppose to be separation of church and state, a person's faith should not matter. Maybe if Ben Carson actually read the Constitution he would have found the part that forbids religious tests for public office. The Islamophobia of conservatives in this country is downright shameful.
Posted by Adam at 8:06 PM

Well, I've really liked him up to this point. I missed this interview, but it would be wise if he kept religion out of his mouth from here on out.

Wow. Such nonsense. It's hard to believe some of the things that people say.

Oh my gosh! I don't know how you American deal with Republicans! You all should move to Canada, but then again, our politicians are not all up there either...sigh....

I was hoping he was at least better than Trump if worse came to worst and we ended up with a Republican in office. Now what?

1. Politics and Religion don't mix.
2. Remember the uproar over the nomination of JFK - the incredible tunnel
from the White House to the Vatican!
3. At least American elections amuse the rest of the World with the stupid
comments that float out of mouths of nincompoops!
4. Just remember you still might end up with a Sarah Palin who didn't even know that
Hawaii was a state of the Union!! ( and with her the list goes on!!!)
GOD HELP THE WORLD.
B J Hunnicut

I am ashamed of the words that came out of his mouth! He is not qualified to lead!

I only heard about this now!

if you ask me a president of any country should never be a religious person in the first place :) Somebody who believes in abstract ideas and fairy tales ain't reliable enough to lead a country

This Republican Party is scary