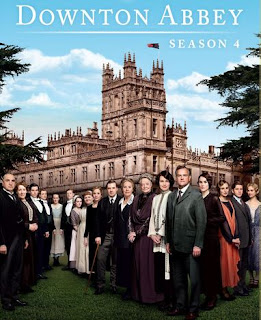 As many of you know, my wife Daisy and I have really been enjoying Downton Abbey lately. We started season one not long ago and we are already done with the fourth. This is the first season to not have the character Matthew Crawley in it as he died at the end of season three. 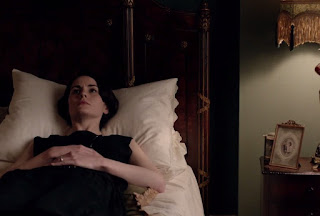 The story takes place about half a year after Matthew dies. His widow Mary is still depressed and doesn't seem to be getting better. Their son George is fine and healthy, but a question arises to whether Mary or baby George is Matthew's heir. Robert seems to side with his grandson, but others want Mary to take on Matthew's role in modernizing Downton Abbey. 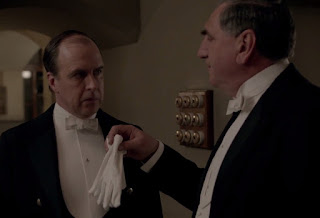 Matthew's death leaves Mr. Molesley without a job. He was Matthew's valet, but despite some help and a lot of time from Mr. Carson, he can't seem to get any job that's not tough manual labor. Alfred still wants Ivy to be his girl, but she grows closer to Jimmy instead. John and Anna Bates are mostly happy, but their marriage will see another great struggle. 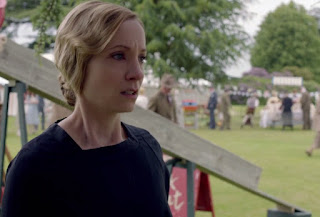 I wouldn't say this is my favorite season yet, but I still really liked it. I really enjoyed Edith's story even though there's a lot of sad parts. Something awful happens to one character, and I have to applaud that person for some of the best acting I've ever seen in the series so far. While it became rather obvious in season three, I didn't really like the character of Lady Rose MacClare as she is just too childish and immature right now.

Wonderful news to know that you are enjoying this BBC excellent series of that era in the lives of "The English Establishment".
I can assure you that the research into this period by the BBC is spot on.
Every aspect would be fact.
I have just completed the BBC series on Nancy Astor of the late 1980's up to her
death as Viscountess Astor in 1964. Nancy was quite a person - very opinionated
and in some ways - strange. She became a Christian Scientist and the bible took over!
She was born as a Langholme in Virginia, USA - that family became rich in the
reconstruction of the rail network in the south long after the Civil war ended.
Nancy Astor when she died was cremated in a Confederate flag and interned
next to her husband on their "palatial estate" - CLIVEDEN.
Cliveden itself has quite a history - the Profumio Affair!!!
Well worth watching this DVD, Adam - correctly historical ( well it is BBC).
Has 3 discs - 3 episodes of over an hour on each disc.
Cheers
B J Hunnicut.
PS: "BJ" of Texas will enjoy it - ha ha!

Hard to believe this fine series is coming to the end of its run.

I stopped watching after Season 2 for no particularl reason. I see I have some catching up to do.

I love dowton abbey but I have to wait Adam to see next season !
Here will be in march 2016 !

I love dowton abbey but I have to wait Adam to see next season !
Here will be in march 2016 !

No Stephen - filming of more series has commenced already.
Due out - same cast from those in the previous series - in early 2016.
Stay tuned.
I am sure that this has previously been well documented!!!!
B J Hunnicut

Lady Rose gets a bit better in season 5. I can't wait for the final season to air!

Thanks for sharing! Never hear abou it!

Dear Mr. Hunnicut, I would LOVE to see this DVD series. I will indeed check on Amazon and see if I can buy it there. Not sure where else to ck .....
Thanks....

Well then you should BJ
It is all class with a capital "C" - the authenticity of the period is 100% correct.
The BBC unlike US mini-series does not make any mistakes.
I watched "Dallas" also when it was on - a load of Texan "Hogwash".
Power politics that would even make the most vile of dictators blush.
I'll improve your worldly knowledge even if it is the death of me.
The World does not circulate around Texan oil fields, Texan beef barons
and certainly not around the family - BUSH!
B J Hunnicut - your newly appointed teacher!!! ha ha.

Dear Colin will suffice.
I hope you are successful - the cost of the whole series will be pretty bloody expensive. Maybe you could try ordering it from a council library ??? I think when I went to a DVD shop to buy the series - it was well over $300 and that was not the whole series as now has been produced.
So - then the library option!

With a DVD you can pause - relax and regroup - much easier.
Cheers
Colin aka B J Hunnicut