Fact of the Day: Crusader Frederick 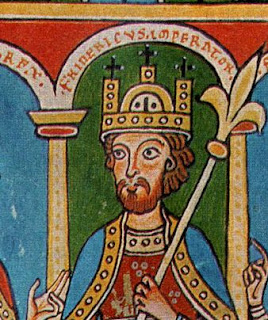 During the Third Crusade, Frederick I the Holy Roman Emperor took a considerable German army to the Holy Land. He perished on the journey, and while there are conflicting stories, the most popular version is that he drowned in the Saleph River after convincing his men that they could simply swim across. This proved disastrous for his army who plunged into chaos after losing their leader.
Posted by Adam at 1:00 AM

Apparently just swimming across did not work...

Not a very good ending.

My goodness you would think someone could have led the army..

Wow that's a sad story. Drowning has to be a horrible death.

Maybe he needed more swimming lessons or a boat

He lead the way, not wisely

I've never heard of him.

I was just reading a book about this. He was nicknamed Fredrick Barbarossa, for his red beard.

He should have remembered King Canute

What a terrible story...and drowning must be so horrible.