Fact of the Day: King William 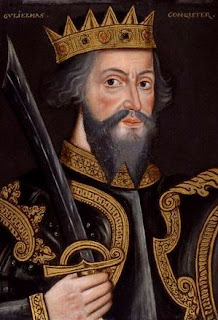 Despite most monarchies never considering illegitimate children as true heirs, William I's (also known as William the Conqueror) parents were never married which caused him some trouble in claiming his father's title of Duke of Normandy. He would later become King of England not by birth right, but by military conquest.
Posted by Adam at 12:00 AM

I think in the days of yore, you might find many a monarch was conceived on the
wrong side of the sheets!
Many a handsome page may have bedded the queen of the day and there were not DNA tests way back then!
Even today, a certain young prince seems to have the looks of a certain handsome cavalry officer of the Royal Household!
Oh good God, Please not the stocks or a barrel of hot boiling Texas oil for me
to be thrown into!!!
B J Hunnicut

even today, we have some princes whose looks say they were conceived in some other bed, not their 'father's' one :) Many a handsome officers and polo players have bedded princesses in our days and the queen would not allow a DNA test....

Watch out Dezmond - you'll be in the stocks with me or boiled in
oil!!! ha ha.
I don't think they can say / order anymore: "Off with their heads"
B J Hunnicut ( who may be sliced up as bees wax!)

If you can't beat them, beat them I guess was his philosophy

He wasn't called William the Bastard for nothing!

DNA testing back then would have been an eye-opener and caused lots of problems.

Interesting history lesson for me.

Now there's something I never knew!

they can eat my shorts :) I'm not their royal subject! The queensie has no sovereignty over the spy