Fact of the Day: Number Place 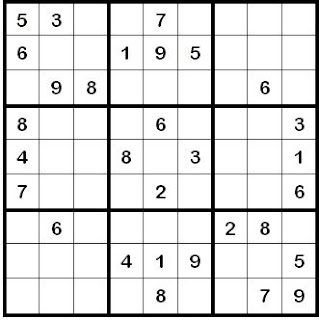 While Sudoku had French origins, the modern version was created by Howard Garns who called the game Number Place in the 1970's. It later became known as Sudoku after a Japanese company made the game popular again. Sudoku is short for the Japanese words Suji wa dokushin ni kagiru which translate as "the digits must be single" in English.
Posted by Adam at 12:00 AM

Email ThisBlogThis!Share to TwitterShare to FacebookShare to Pinterest
Labels: fact of the day, france, japan

Oh good God - there is a knack of doing this which I can't fathom out!
I have friends who can do the whole set of games in 15 or less minutes!
It will be interesting to see how many of your readers can do this.
B J Hunnicut

Have never really done this game before...what can I say?I see numbers and I get the shivers!

I didn't know that, I supposed it was a Japanese game :D
I was totally wrong! I was a sudoku addicted years ago, I had also got the game on the mobile!!!
Have a great day!

I've never tried Sudoku puzzles, sure I could do them though

I could never get it right, that's me I suppose.

IT drives me nuts!!

I never learned how to play this.

Fascinating! My Rare One loves sudoku so I'm going to forward this linguistic factoid on to her.

My younger daughter used to love Sudoku when she was in elementary school. And she was pretty good at it.

Never played this game. i suspect it would drive me nuts.

Wow, it's interesting! I play it sometimes when I'm on train or beach.

I've never tried it but I'm not good at games so I doubt I could figure it out.

My parents play. Stretches the mind...

While I love crossword puzzles, including the mixed ones such as Cryptograms, etc., I have never liked Sudoku.

While I love crossword puzzles, including the mixed ones such as Cryptograms, etc., I have never liked Sudoku.