Fact of the Day: One Parliament 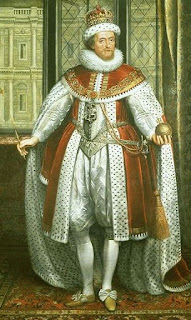 Despite Scotland's notable history of fighting for independence, the first King of both Scotland and England James I (VI in Scotland) advocated for one parliament for both countries despite being King of Scotland before taking the English throne. Scotland would eventually lose its power and not regain a real parliament of its own until 1999.
Posted by Adam at 12:00 AM

Poor old James 1 was not the brightest light to ever come out of Scotland.
He was referred to by later historians as "the wisest fool in Christendom".
However he did try hard and did keep his head attached to his body, so that is
a plus.
Cheers
B J Hunnicut
PS: Australia is fenced in - by oceans - the Pacific, the Indian and the Southern.
Such a great feeling - ha ha.

they should've thrown down the British rule last year too, but sadly they didn't

Wow, that is interesting !

thanks for this interesting information :)

Goodness such in recent times.

Wow, that took a long arse while

they got a pretty decent deal. The strength of the British pound and a considerable amount of autonomy that British parliament doesn't really affect them even though they have many seats in it.

The ones who should be really upset are the English.