Fact of the Day: Prince of Old Wales 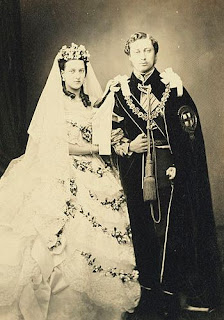 The heir apparent of the British throne is typically called The Prince of Wales. Queen Victoria's son Albert Edward was the longest-serving Prince of Wales. After almost 60 years, he finally became King and ruled as Edward VII. The current holder Prince Charles will surpass the record if he remains Prince of Wales by September 10th, 2017.
Posted by Adam at 12:00 AM

It's a long time to stay in the wings.

What wings Margaret - ha ha???
All Princes of Wales have been bed jumpers of the highest order.
The one above was an expert at it, then the British had "Edward",
who liked married ones and ended up in France with Wallis!!
Charlie boy - !!!! He kept the sexual glands on full alert.
Just ask Camilla - once Mrs Parker Bowles and now the Duchess of
Cornwall.
Oh what a web these Princes of Wales weave!
B J Hunnicut
aka Colin

Poor Charlie, I do wish he would be a king just to see the Brits go mad because of Camila. I do prefer Camila to media manipulative late Diana, though

I sure hope Charles doesn't kick the bucket before he becomes King. Lawd, he's been waiting a LOOOOOONG time!!!!!!

He's been waiting a long time!

The current Windsors are breaking many records for longevity.

I think Prince Charles has a good shot at becoming the new record holder.

He just may break that record

Queen Elizabeth isn't going to give up the throne any time soon. I think her son is probably pissed too. He'll be in the grave before she steps down. lol