Fact of the Day: Royal Nephew 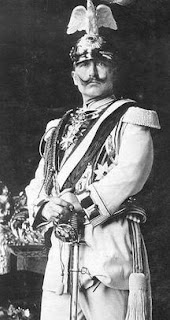 Despite being a hated enemy of Great Britain during World War I, Kaiser Wilhelm II was the eldest grandchild of Queen Victoria. He craved the acceptance of his grandmother whom treated him with courtesy and respect. Other members of his maternal family thought he was arrogant and obnoxious. Not many relationships were as terrible than the one with his uncle Edward VII, as he treated him like another nephew instead of Emperor of the Germans.
Posted by Adam at 6:00 AM

There's always one in the family somewhere

He looks so serious.

Grandmothers tend to love their grands, no matter what.

Oh dear...sometimes seems to happen in some families.

Well, it was a totally dysfunctional family after all.

LOL! And I thought my family's dynamics and cross-currents are challenging at times! Today Queen Elizabeth II became Britain's longest serving monarch. Have a good one, Adam!

I agree with Pat...there's always one!

Well what do you expect from "in-breeding" - Victoria of England and Leopold 11 of Belgium and the House of Saxe-Coburg und Gotha!
Elizabeth11 of England is a result of all this "inter-marriage" rubbish of the 19th Century.
B J Hunnicut