Fact of the Day: Secretary Bryan 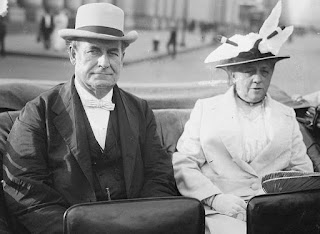 In the late 19th century to the early 20th century, William Jennings Bryan was one of the most notable leaders in the Democratic Party. He was nominated for president three times and never won. Despite his large role in the party, the only two notable offices he ever held was Congressman in Nebraska, and two years as Woodrow Wilson's Secretary of State.
Posted by Adam at 12:00 AM

I cannot share your enthusiasm, Adam.
I thought I had heard of him so went to my "mate", Wiki, for
further details.
That did it. He was a strange "kettle of fish".
B J Hunnicut. ( The Aussie version).

Must admit I've never heard of him. He must've been notable indeed to be nominated three times though.:)

Guess people didn't care for him, or something was wrong with him..

I have never heard of him either, one of the reasons I enjoy your blog. I learn of people I want to find out more.

indeed he was, the Scopes trial for example

Congressman in Nebraska... Well, that still beats being a teacher.

He was quite the character.

such a nasty hat on his missus!

Yes Adam - his name came up in an excellent US produced
mini-series - Prohibition era and the theories of Darwin v's the
Bible. I only recently watched the two disc series.
Some of your readers should watch it - as most say in comments -
never knew that?? I wonder constantly if they ever attended school of
any sort!
I don't think he would have been a friend of the Boston democrats, eh?
As they say - "Being a splendid orator does NOT necessarily make a good politican".
Cheers
B J Hunnicut (The Aussie Version)

Scopes Trial:
Movie: ' Inherit the Wind" - excellent.
Should be made compulsory viewing for " the believers"
that the bible is the TRUTH !
God made the world in 7 days!!!!
Utter rubbish!
B J Hunnicut