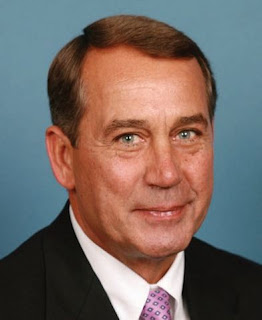 In a bit of a surprise especially after the Pope visited Congress yesterday, Speaker of the House John Boehner says he will resign from Congress. This won't happen until late October of this year, but this has made the far-right Republicans very happy along with liberals like me who never liked John Boehner in the first place. He championed the Tea Party garbage in 2010 mid-terms elections of lies and fear, but lost their support when he didn't give into their insane ideas. He lead the House these recent years who stopped at nothing to undermine the President instead of reaching across the aisle. All I can say is good riddance!
Posted by Adam at 8:32 PM

Interesting "bloke" from a blue collar background.
https://en.wikipedia.org/wiki/John_Boehner
Certainly made good from humble like beginnings, so credit to him
for doing so.
He featured on our (Australian) early news this morning with the announcement
and his meeting with Pope Francis.
Well the Pope can't be blamed for his departure, eh?
John Boehner is a Catholic and with former Senator Ted Kennedy did good work for
school kids in less affluent neighbourhoods. So that is a plus.
Pity he was roped in with the "looney ideas" of the Tea Party clowns.

I like this candid reply he gave to a TV host in 2014.
" I like to play golf. I like to cut my own grass. I do drink red wine, I smoke
cigarettes. And I'm not giving that up to be President of the United States".
Cheers
B J Hunnicut

I won't miss him either, but I hope we don't get someone worse.

I was pretty darn shocked. Like Stephen though, I hope we don't get someone worse than Boehner.

glad you are happy.

I really don't care either way!

Well then Ms Kay
Give an alternative who may appeal to you.
But having noted many of your comments, I don't think
you have a bloody clue on anything.
I think you like many bloggers just get an ego boost when you
see your name appear.
That is the reason I got rid of my blog - the inanities of commenters
who didn't read, didn't look at pictures, didn't ask questions but "sweetly"
wished me to "have a nice day" !!!
B J Hunnicut.

He looks like he is about to cry in that photo...

This was quite a surprise too, I hope to hear what he has to say!