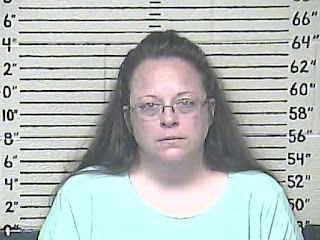 I think many of you have already heard the story of Kentucky's Rowan County clerk Kim Davis who refused to issue marriage licenses to same-gender couples after the Supreme Court ruling told her she had to do so, then the Governor told her to do her job, then a Federal judge told her to do her job, and  the Federal Supreme Court denied her appeal to refuse such requests due to "religious freedom" citing her Christian faith. She has had every opportunity to resign (in Kentucky the position is elected so she can't be fired or moved to another position), and has refused to do the job she was elected to do. She is now in jail for contempt of court, and I do not pity her at all. 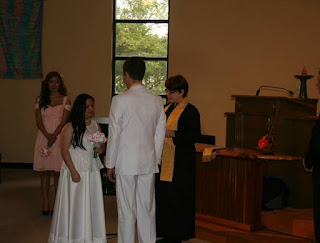 You know it wasn't long ago that in the American South that a marriage like my own was considered to be a cultural no-no, and that there were laws on the books that prevented marriages between Caucasians and other races. And the same people who made/supported the law thumped their Bibles, and protested the Supreme Court which made those laws no longer enforceable. Imagine if the Spartanburg county clerk told me and Daisy that she would not give us a marriage license? The 14th amendment guarantees all citizens equal treatment under the law, and what Kim Davis is doing is the reverse. While the conservative Christians are "standing with her", the rational side of America must realize that such behavior by government officials can not be tolerated. I don't care if Kim Davis is in jail or not, but the one place she should not be is behind a government desk that is suppose to serve the people.
Posted by Adam at 11:00 PM

Holy Hell - that bitch would scare the living daylights out of " deranged coyotes" or some such animal pest in the USA!
She looks like the SS female guard at Belsen Concentration Camp, Irma Grese - nicked named the "Beast of Belsen" - scary looking individual is this Kim Davis!
Like Grese - some people can be so indoctrinated by racial doctrines or the Bible and that is dangerous.
Politics and bibles JUST DON'T MIX - unfortunately in some states/counties in the South of the USA!!!
See the movie: "Inherit the Wind" - the ideas in that movie still unfortunately exist in the Bible Bashers of the South.
B J Hunnicut

I totally agree, Adam! She's not there to preach to people; she's there to do a job and she should do it. And if she can't, she should step down. Imagine the anarchy if everyone just thumbed their noses at the law.

She wants to have her cake and eat it too. She can resign since she won't or can't do her job, but she doesn't want to give up her 80 thousand dollar a year salary.

She has a job and she should do it. She can believe whatever she wants to but she still has to do her job.

Isn't she the one with many divorces under her belt too? Isn't that against her religion or does she just cherry pick what she wants to enforce from her bible?

Bravo Theresa.
Spot on - what I'd call a bulls eye shot. You hit the nail right between her rather beedy eyes.
B J Hunnicut

I definitely agree, of course. If she's not able to do her job according to the law, she should step down. Now! The scary part for me is the people (especially Mike Huckabee) who are supporting her. Are they serious? Is this what they want from their elected officials. Do they want people to start using their religion to do their job? What if it were another religion and that person followed its dictates? What then? Slippery slope....