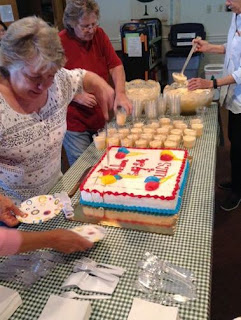 The minister who married Daisy and me recently moved to New York, so our Unitarian-Universalist church (which welcomes all kinds of religious and non-religious viewpoints) had to find a new one. We don't get to go every Sunday because of my work, but we managed to go during her first real sermon. After the service was over, there was a reception with a giant cake. 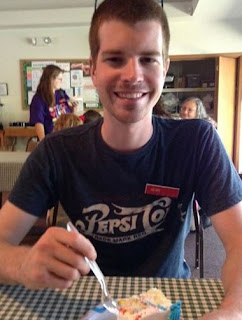 We luckily were near the front of the very long line, because I didn't realize there would be cake that day. It also was a vanilla cake which I prefer, as I usually won't eat cake that's chocolate. It wasn't the best cake ever, but I wasn't complaining. 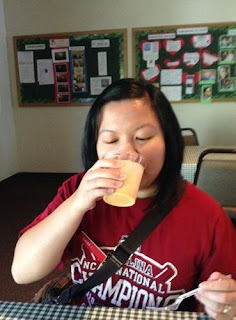 They also had these little drinks that were suppose to taste like creamsicle ice-cream . I just had cake, but Daisy liked the drink. She was pretty excited that there was cake too. This was the same room where our wedding reception was at. So the last cake we ate there was our wedding cake.
Posted by Adam at 2:00 PM

I love Cake... plus it's always a bonus especially when you're not expecting it :)

Ah, great you snatched up some cake!

What a great treat!

What lovely an amazing cake Adam :)

Read again - this time with eyes open and brain (???)
functioning as to who MOVED to NYC!
B J Hunnicut

I prefer vanilla cake too. I'd really like to try a creamsicle drink. Never had one!

Cute pics of the both of you...
my favorite cake is a white cake with a real fudge frosting...and, of course, no one can make them like my mama could. :)
xo

So much cake memories in that room:D

What a nice event, and lovely picture of Daisy enjoying her drink.

I would like to try the creamsicle ice-cream drink!