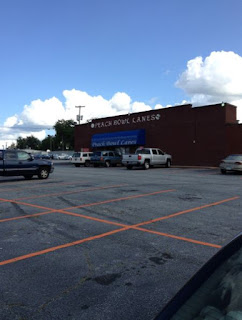 One of my wife Daisy's favorite things to do is to go bowling. I had seen Peach Bowl Lanes on a trip to Greenville, and figured I'd take her when we went back to Greenville for her birthday. It's about halfway on the trip in a tiny city called Greer, so I figured it would also make the car ride easier though it's not bad either. 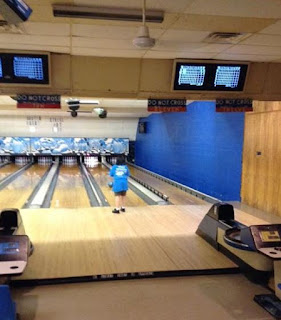 It was by far the smallest bowling place I've been to. But I didn't mind, as even on a Friday at 5pm there wasn't many other people there. They also had pool tables but we didn't play billiards as we had to meet everyone for dinner. We played two games, but I usually consider the first more practice than anything. Daisy got two strikes in a row which was the main reason she won the second game. She usually loses to me, but I'm glad she won on her birthday.
Posted by Adam at 2:00 PM

Congrats to Daisy -- two strikes in a row!

A good idea for her to win on her birthday.

I haven't been bowling in years.

That was a lovely birthday gift, you taking her there and Daisy winning.

I'd be in the first lane with the bumpers.

Congrats on your win Daisy!