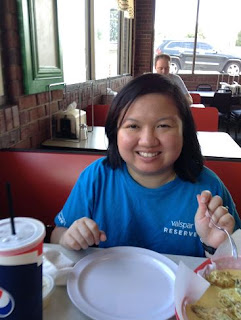 In early August, we celebrated my birthday a little early. The restaurant of the day was called Pizza City in Greenville, SC. It was suppose to be "New York style" pizza but I've never been to New York so I can't say it was like New York pizza or not. I thought the pizza could have been better, and my wife Daisy had some chicken wings.
Posted by Adam at 11:00 PM

so tell us.. when are you and Daisy getting pregnant? :)

Such a sweet pic! Glad you got to go out for your birthday, even if the food wasn't the best :)

No matter where you are, the food does not really matter as much as the one you are with.

Pizza and chicken wings seem to go together these days.
Chicken wings...yum.

It's been a while since I had a pizza. Thanks for getting me thinking about it.

good that Daisy had chicken wings then!

Daisy has a pretty smile :)