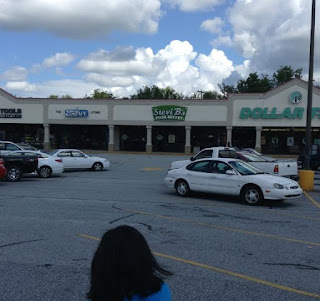 Daisy's birthday was on the 11th, so that day she wanted to spend most of our time in Greenville, SC. I had heard of Stevi B's Pizza only because there were plans to have one here in our nearby city but nothing ever happened, at least not yet. I was actually expecting it to be a stand-alone restaurant, even with GPS I got a little frustrated trying to find it. 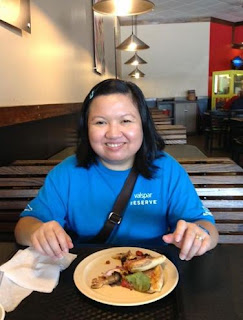 I wanted to take Daisy there because someone mentioned that it was like my favorite pizza place Mr. Gattis. Though I wouldn't say their pizza was that good. It was good pizza, but it was one of those that tasted far worse about 30 minutes after leaving the oven. Daisy had two pieces of some of kind of pizza with a lot of stuff on it, and then a big salad after that.
Posted by Adam at 2:08 PM

We love pizza but want really great ones....:)

Nice pictures. I have a little pizza place right down the street that we really like.

I can't remember the last time I had really good pizza.

Happy birthday Daisy! My husband's favorite pizza is at Iowa City and mine is in NYC. We do have one here in Vegas that we both like, and it is at OTTO, a Mario Batali's restaurant at the Venetian.

We have too many pizza around here. Makes it too easy for me to be tempted.

The important thing is she liked it!

As long as you two had a good time together, then all went well :)

I'm glad you found it, even if it wasn't spectacular pizza.

Happy Birthday, to your wife.