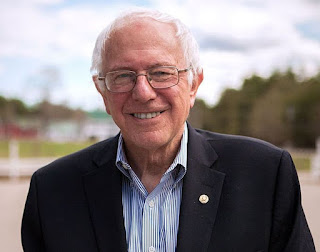 At the start of the 2016 election cycle, it was deemed that Jeb Bush would be the front-runner for the Republicans but now it's Donald Trump. Hillary Clinton seemed to be heir apparent of the Democratic nomination, but Bernie Sanders is now polling better than her in key states like Iowa and New Hampshire. I've been a fan of Bernie Sanders for years, but I was a little worried that his age and being more liberal than what Republicans think Obama is would hurt his chances. But now it seems that Bernie might be the front-runner.

Do you think Bernie Sanders can win the Democratic nomination?
Posted by Adam at 2:00 PM

It would be nice if he could. I like his politics.

Wouldn't it be something if he did?

It is scary Trump is the frontrunner

I don't know. It'll be interesting to see who wins. I just hope it's not Trump.

oh, sorry i had no idea who he is, lol. but i knew Hillary Clinton.

This, Senator Bernie Sanders, has not been mentioned in the Australian
press. I'd be surprised if he is known outside the USA and from above, not
too well known by your readers.
1. He is too old really to be running for President.
2. He may have maturity but at 74 will he be flexible?
3. He, due to his religion (again raises it's head!), although he is
not a strict one, is that he is of the Jewish faith.
The Arabs states would be - shall we say - up in arms!!!

I think a better candidate surely from the Democrat side MUST be found.
Hillary Clinton - it must not be. I've read that there is another female Democrat
candidate with far more ability and drive than Ms Clinton.
The Republican side of the debate have come up so far with a heap of
utter nincompoops - surely there must be one with some iota or semblance
of sanity and reality???
B J Hunnicut

Goodness BJ - as if we don't all know.
Glad that you enjoyed the link - other links off the one
given will give far more photos and info.
I am a Life Member of the Old Boys Union of SJC.
--------
DEPP !!!!!!!!!!!!!!!!!!!!!!!!!!!!!!!!!!!!!! !
Kindly don't mention his name. Like two US rappers who have been
charged with domestic violence and are having their visa applications
re-examined - which means TURNED DOWN.
We DECIDE now who comes here - one person who may get a refusal
would be ex-VP "Dick" Cheney. He could be hung by his testicles from Sydney Harbour Bridge if the Sydneysiders had their way.

Depp is not welcome here - nor are his dogs or wife. The dogs if they turn up here again illegally will be "put down" and his wife will probably face 10 years
in jail ( without puppy dogs to pet - ha ha!)
B J Hunnicut (Colin)

Yes, I think Sanders can win both the nomination and the main election itself. The election of President Obama was a positive change for the United States and the election of Senator Sanders to the presidency will also be positive; Sanders is running on positivity and supporting everyone, unlike all the Republicans.

Donald Trump is a frontrunner? Oh my gosh...

All I can say is that I am not a fan of Donald Trump or Hilary Clinton.

It's a long shot, but anything is possible.

I'd like to see him beat Hillary. I just can't stand that witch and would HATE to see her as our next president!