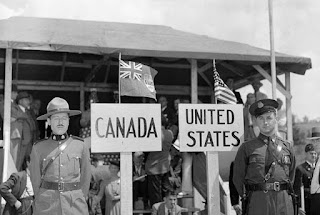 Wisconsin Gov. Scott Walker is running for the Republican nomination for president, but he certainly came up with an idea nobody else would have thought of. He wants a wall on the entire U.S.-Canadian border, which is the dumbest thing I've heard of in some time. The racists down near Mexico can't build the wall of their dreams, and with a similar length of land to cover this other wall would be quite the pain for taxpayers. But unlike the Mexico wall, this one wasn't to keep out immigration, but to prevent terrorists from getting through. He honestly thinks a wall will stop that? It will just hurt the economic relationship between the United States and Mexico when that wall slows everything down.
Posted by Adam at 12:00 AM

Actually Adam it is excellent news.
The USA all behind a wall to keep your bloody ideas, bibles, stupidity
within what I refer to as the 4 Square Syndrome of the US idea of the
World:
Seattle to Northern Maine - down to Key Biscayne - across to San Diego and
back up to Seattle.
Great idea - keeps all the nit wits fenced in.
Then the World would be a safer place.
Thanks Trump and Gov. Walker - brilliant ideas.
The outside World rejoices.
B J Hunnicut.

I note Christine you are Canadian.
Yep - keep them all fenced in.
I never did like that song - "Don't Fence me In".
Now I'm loving it.
Cheers
The Aussie B J Hunnicut

Adam
Where did you dig up that Canadian flag.
It has been out of date for quite some time.
Canadian readers would not be impressed.
They have a Maple Leaf flag - red and white!
B J Hunnicut

I ran across this bit of news yesterday and had to laugh. Nothing surprises me anymore. What a moron.

haha yeah saw this too, the guy is a moron and then some.

This gave us a good laugh up here!

the photo is from 1941, I was looking for some photo in the public domain for the US.-Canada border and found this.

A wall won't work. Walls never do. Just ask the Chinese. Thousands of people died building The Great Wall of China, but it failed miserably to keep out barbarians.

It's hard to understand why, if you don't like us, you keep leaving comments on a USA blog.

But I do Ms BJ - I have travelled to the USA on 8 occasions.
I do have US friends - who thankfully are more mature and educated, and have travelled than you.
You just stick to Texas - God forbid that state deserves the likes of you.
I don't think the Republican Party can install a fence to stop sensible comments.
B J Hunnicutt

Oh yes BJ of Texas - I have stayed at Spartanburg - stranded there
due to travel arrangements with my friends in Atlanta who hadn't returned from their holidays at the seaside .
I have stayed in the South - Atlanta (6 times), New Orleans, Baton Rouge,
Charleston SC, Charlotte NC, Jacksonville FL and various places in between.
Also regrettably in that "lovely", loud mouthed city of Houston!
Pity NASA didn't shoot Houston into space!!!
B J Hunnicut
The name is Germanic but this city is not in Germany!!!
Have you managed to visit Adam's domain????

This is just so stupid.