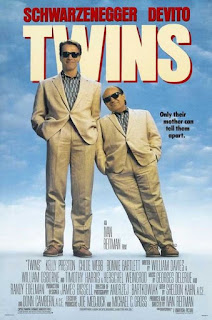 I don't think I ever heard of Twins until recently. It came out the year I was born so I obviously never saw it back then. But the idea of Arnold Schwarzenegger and Danny DeVito playing the roles of two oddly dissimilar twins was too good for me to ignore. Apparently critical opinion wasn't that great in 1988, but what did I think about it almost 30 years later? 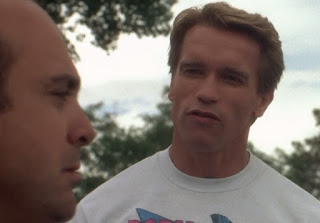 The story starts explaining the origins of Julius and Vincent Benedict. Their births were part of a scientific experiment where they had multiple genetic fathers. All the dads were to give their son the best thing about them from strength, logic, and compassion. Julius was born as the most perfect human to ever live. He lives somewhat isolated on an island until he learns that he has a twin brother. 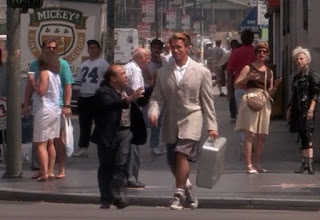 He travels all the way to meet Vincent, who did not get Julius' superhuman genetics. Julius learns that their mother died, and Vincent spent his childhood in an orphanage. While Julius is pure-hearted, Vincent is far from it. He isn't an evil guy, but makes a lot of bad decisions. One of them may get him into so much trouble that only Julius could rescue him. 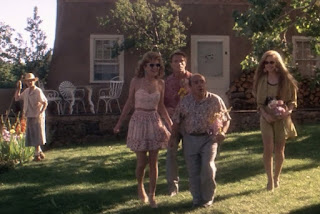 While it wasn't the greatest comedy I've ever seen, I really liked Twins. I thought both Arnold and DeVito played their roles well and the characters worked well together. I also liked the love story between Julius and Marnie Mason. Critics usually pan most comedies but I don't think fans of either two of the actors would be disappointed.

I remember being mildly amused by this when it first came out. Of course, I'm a big Danny DeVito fan, so that helped.

I thought this was a funny movie.

I remember seeing it at our local theater. Yes, way back then.

An amusing movie - rather bizarre story line bordering on the
completely impractical "scientific experiment" that I doubt medical
science would permit.
Strange that it also got past the rather stringent US laws that relate to
movies???? Multiple genetic fathers !!!!!

Regarding the young uniformed ladies - thanks for the verification of what the
uniform was - much appreciated.
The US navy does have very smart officer uniforms - then again most
navies have these days.
Cheers
B J Hunnicut aka Colin

I saw this a LOOOOONG time ago. I thought it was fun.

I remember laughing at the line: so identical only their mother could tell them apart.

I liked it too, Adam. Those two were a good team.

It's been ages since I saw this movie!! I feel like I have to rewatch it :)

I loved this movie way back in the day!

It was a fun one when i watched it years ago