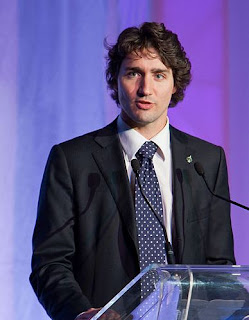 While I'd rather not state any opinion on Canadian politics, I do notice what goes on there as they are one of the greatest friends to the United States. Their political system is a little different as the Prime Minster is never really directly voted into office but rather his party in parliament. The Liberal Party's leader Justin Trudeau (son of Pierre Trudeau) will be Prime Minister very soon as his party won a landslide victory against Stephen Harper's Conservative Party. I wish our Canadian friends the best of luck with their new leadership.
Posted by Adam at 1:00 AM

Thanks Adam, we are very excited, he is a good man.

Yes, Justin is young -- he's 43. I'm impressed that you know as much as you do about Canada, Adam. Most Americans know nothing about our country and care less, LOL!

Thanks, Adam. We got the change we wanted, and I hope the next four years will be good ones for us.

Hoping things are very good with their new change.....