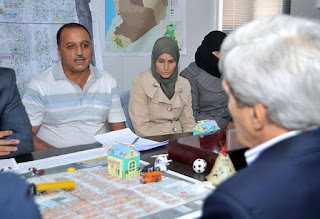 Presidential candidate Donald Trump has rarely back downed from saying almost anything regardless of how bigoted, misogynistic, or racists it sounds. The Syrian refugee crisis has caused much debate all around the world, but Donald Trump wants to keep the ultra-conservative wing of the Republican Party on his side by saying he'll send them all back "home" if he becomes president. The United States is more than responsible for what's going on in Syria. Even if America wasn't, sending back refugees that have done nothing wrong is just immoral for too many reasons.
Posted by Adam at 12:00 AM

Adam
Nothing surprises me with the words that float out of that idiot's mouth.
This present influx into Europe is to be laid at the feet of the US - and that
is that. OIL !!! is the reason and the US wanting to control that supply world wide.
Where was US aid to Nepal????????????
None - no OIL in Nepal.

At present the most dangerous person on this planet is Donald Trump.
The "Tea Party" bigots and idiots not far behind and then there is "darlin' Sarah Palin".
It is no longer a joke, as for "God Bless America" - you should be singing "God Save the World".
B J Hunnicut aka Colin (Brisbane. Australia)
PS: Commenters have some BLOODY SENSE on this subject. Especially the US brigade - but that would be asking TOO much.

I don't like Donald Trump, and he has a big mouth and should learn to keep it shut sometimes. I don't recall anything positive coming out of this man's mouth, so in my view, "If you can't say something nice, then don't say anything at all", and if you do have to say something, at least be kind and constructive about it.

I don't like Donald Trump, and he has a big mouth and should learn to keep it shut sometimes. I don't recall anything positive coming out of this man's mouth, so in my view, "If you can't say something nice, then don't say anything at all", and if you do have to say something, at least be kind and constructive about it.

He is a joke. I don't know how anyone can take him seriously.

I have no respect for Trump. He'll say anything to get attention.

What an idiot. The US should take all possible refuges from those regions, every single one of them, because they're the ones who caused hell down there and are still doing it.

WELL...of COURSE I beg to differ that Trump is "the most dangerous person on the planet"...it is, by far, President B. Obama.
and that's all I have to say about that !!!!

I think it's a sad, sad state that we've gotten into as a country when people actually start to consider Trump as a viable candidate for presidency. It makes my stomach hurt to think of Trump as our next president, though I can't stand Hillary either.

BJ
What are we going to do with you?
Your knowledge of history is flawed and distorted.
What you have written above is just utter garbage and could be
bordering on racism???
And you say you read biblical tracts!
B J Hunnicut aka Colin

Now BJ - a response.
You constantly have belittled Obama for reasons unknown.
I had a once friend like you in Crossville Tennessee.
She cried when he was first elected - went beserk at his second
election and even stated on her BLOG that she was locking herself in her bedroom to pray for the USA and was totally convinced - irrespective of all facts, that
Obama was:
1. A Muslim
2. Was born in Kenya.
When I pointed out these facts to her were totally unfounded, she then sent malicious e-mails to people regarding me to US friends of mine
with whom I put comments on blogs. She failed.
You don't frighten me. I feel sympathy for you.
I probably have seen more of the USA than you ever will see and I have visited Texas!
Colin

Whew! I knew there was a reason I avoid discussing politics! A Trump win would make us the laughing stock of the world, I'm afraid!