Fact of the Day: Benito Irony 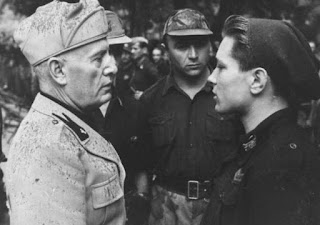 For a lot of his political career, the Italian dictator Benito Mussolini considered himself an atheist and often ridiculed the Catholic Church. Despite this, as the nation's leader he formed a friendship with the Pope and the Catholic Church. He participated in Catholic traditions and enforced religious rules like no contraception, and closing down some but not all places that served alcohol.
Posted by Adam at 12:00 AM

He may have got the trains to run on schedule, put the mafia on notice, but no way did he stop vino drinking in Italy.
The Vatican would have one of the finest cellars in the World - and in Benito's day also.
And El Duce was pretty fond of the vino, beer and other alcohol drinks as well.
Nah - this is pure fallacy - too bizarre for reality.
B J Hunnicut aka Colin

let me put into a bit more context. When I wrote that it didn't mean a total end to beer/wine/whatever in Italy. It seemed that Mussolini to appease the church at once in his rule took down places like rowdy bars and nightclubs.

LOL....I guess he just picked and chose what he liked about the religion:D

Power hungry or a closet catholic?

Wow! I love all the little known facts you post here!

That is quite interesting!

I'm sure Mussolini intended to benefit from every decision he made. If he closed down certain businesses it was probably because he wanted to eliminate competition. I seriously doubt cared for the Catholic Church beyond his ability to benefit from it.

I think deep down he was Catholic.