Fact of the Day: Britannic 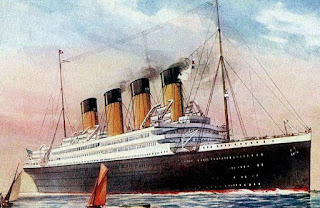 The Titanic had a sister ship known as the Britannic. She did not hit a iceberg, but she did sink. Though it was after the Titanic sinking, and an underwater mine during World War I caused her to sink. Though only about 30 people died, as the ship was far more prepared than the Titanic about safety and evacuating.
Posted by Adam at 12:00 AM

Hi Adam, I love everything about the Titanic (not the movie, the real ship), so thanks for sharing this. The Titanic had two sister ships...the Olympic and the Britannic. :)
http://www.starway.org/Titanic/Sister_Ships.html

It's just so sad that so many people died on these ships.

I hope they quit after that

They didn't have much luck

I remember reading that..

wow both were doomed.

I've heard that this one was so much bigger than Titanic.

I knew there was a sister ship, but I never knew what happened to it.