Fact of the Day: Indentured Servitude 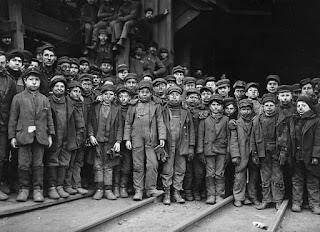 In the 18th century many young men and boys became indentured servants for passage to the New World. The servitude meant being forced to work for a employer for a period of time with an average of five years. Many poor European children were kidnapped and sent to indentured servitude often ending up in the Caribbean.
Posted by Adam at 1:00 AM

Oh the world we live in!
We wouldn't stand for that kind of behaviour these days with children.

Well Margaret I can boast that one of my forebearers was sent to Australia
as a 14 year old convict from the UK on the First Fleet (1788) for stealing a rabbit from the estate of one of the Lords and Masters of the day.
He served his term - he obtained his "leave" and that side became cattle people and hoteliers!
Not bad for a kid who couldn't read or write - just signed an "X".
This young kid married another young female convict!

I am very proud of this heritage and to be a registered member of " The
First Fleeters" organisation. Once considered a blot on one's heritage,
now a BADGE OF HONOUR". How times change, eh?
B J Hunnicut aka Colin

Where Bob????
I think you'll have to be more explicit !
Colin

Then as now, like could be rough for the poor.

Most human history is nothing to be proud of

And yet, not much has changed, we still have enslaved kids and people around the world and modern version of enslavement :(

I didn't know about the kidnapping.

I can't begin to wrap my mind around how hard these peoples lives were.

Century after century and cruelty continues - some never learn.

What? That's so sad. How do people have no sympathy for even children?

Unfortunately horrible things are still happening to children the world over today! Thanks for sharing this, Adam!