Fact of the Day: Nautilus 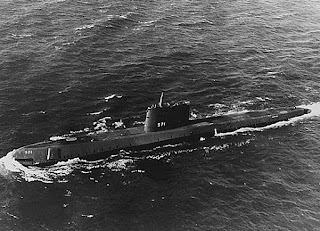 The USS Nautilus was the world's first operational nuclear submarine. It gave the United States a great naval advantage over any nation in the world. As nuclear power basically gave it better speed, longer endurance, it could submerge for longer periods of time, and a few other advantages over typical diesel-run submarines which were standard in most navies at the time.
Posted by Adam at 12:00 AM

Yes - that is so with endurance but in naval exercises with Allied navies, the diesel operated submarines have quite often penetrated this protection by US nuclear submarines and with "dummy" torpedoes sunk the "so-called naval war games" escorting destroyers of the aircraft carriers and then sunk the aircraft carrier.
I think nuclear powered submarines are only in fleets of the major World players.
I believe India might the new member of this club.
B J Hunnicut aka Colin

She was a HUGE deal when I was a little kid, Adam. I seem to recall a trip under the North Pole during which the crew surfaced and played baseball, running the bases 'around the world'

I always like reading these facts, Adam. You learn new things everyday:)

It changed a lot and was a huge deal

Or, to rednecks, the world's first nuke-u-ler sub.

Wow although nuclear makes me nervous.

Oh, the tales I could tell you of diesel submarines!
But, I'm thinking I'd better not.

It was a remarkable achievement.

I would dearly HATE to ride in a submarine....tight places, ya know. :)