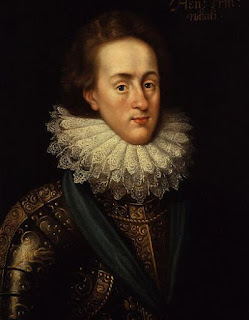 Prince of Wales Henry Frederick died at the age of 18 of typhoid fever. He was considered by many to be a bright and promising heir to his father King James I. The nation considered his death a tragedy, and were especially mournful in comparison to other previous heirs who died too soon. His younger brother became King after his father's death as King Charles I. His brother was eventually overthrown and executed during a Civil War.
Posted by Adam at 2:00 AM

I greatly enjoy your slices of history.

Charles was the crazy one, right?

Awe, look at that little cutie. So sad.

I recall he went a little crazy

That was awfully young.

Death is the Great Leveller, as they say.

So he would have likely died anyway.

That was a young age to die...of course no medicine much back in those days..

Too bad he died so young. Interesting how this portrait is all about status while revealing no character. The clothing is expensive and painstakingly reproduced in astonishing detail.

Wow- when you look at that portrait of him he looks like he is a LOT older! Plus, he was balding already. Great random fact!

Eighteen is way too young. Can you imagine being that king? Your prepared heir suddenly dead? Yikes.

I wonder if history would have been very different had he survived. Typhoid was a sad killer. I had a great great great uncle who died of it at the age of 24 while serving in the Civil War--just visited his grave for the first time this summer...unfortunately since he wasn't a Prince of Wales (or the like), my family doesn't have any photos/portraits of him. I'm still hoping to run across one someday though.