Fact of the Day: Rasputin Prophecy 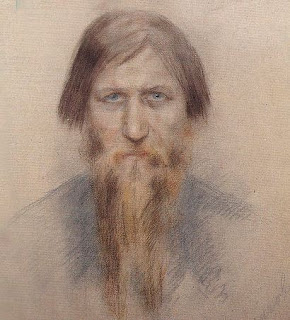 Grigori Rasputin became famous for being a friend to the family of Tsar Nicholas II and being a mystical faith healer. He also supposedly predicted the end of the world which was to occur on August 23rd, 2013. He believed a giant fire would take over the Earth, and Jesus would return on that date.
Posted by Adam at 12:00 AM

Good old Rasputin!
I wonder did he tell the Tsarina and the Tsar when and where they would die?

Certainly he was difficult to kill - the young nobles had heaps of trouble trying to
finally kill him.

Lesson of the day: Don't put your life in the hands of these so-called mystical faith healers or is that fanatics??
B J Hunnicut aka Colin

Rasputin in Hellboy was a pretty cool villain:D

I found it very interesting how he had so much sway over the Russian Royal Family. Thanks for visiting. Your answer was correct. I am impressed with your knowledge. I will be publishing your comment tomorrow.

and his preserved willie is kept in a jar in one of the crazy museums in Europe :)

ha ha - Good one Dezmond
From what I have read it was well used also!
Rassy boy did more than preach.
Colin

Well he was wrong..

Another nutcase that tried with a prediction and failed

I understand he was amazingly difficult to kill.

Remember that song Rah Rah Rasputeen? Well, it was big in the 80s.

I think the Bible says that NO ONE shall know the time or date....lol...but then Rasputin was SOMEONE....at least in his own mind.

Another failed prediction. I never would have guessed.

hahhaa...yes, I think Rasputin was a Legend in His Own Mind....
and of course, NO one knows the end of time.
Great fact, Adam

Yes - they, the young nobles, poisoned him, shot him, belted him and finally had to drown him in the icy Moskva river and still he refused to drown for some time.
Scared the shit out of the young blokes!
B J Hunnicut

Well so much for that prediction.

could happen one day...just when is the question

Well, we survived that end of the world date! It is interesting how so many have been predicted, and there's still usually someone out there who takes a date seriously. I do believe the world will end, but am not going to get worried over any particular date.

Oops! Looks like he goofed... in more ways than one.