Fact of the Day: Underworld 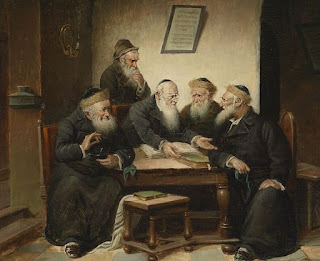 While the concept of hell is about the same for almost all versions of Christianity, hell does not exist in Judaism. There is the place called Sheol mentioned in the Tanakh/Old Testament where most or all of the dead seem to go. However it is described much different than Christianity as it has been told to be a dark and gloomy place.
Posted by Adam at 12:00 AM

Email ThisBlogThis!Share to TwitterShare to FacebookShare to Pinterest
Labels: Christianity, fact of the day, Judaism

Really, I don't know anything about Judaism.

Interesting, that every religion has a place where it puts its non-faithful people...

So it's not warm? Hmph, hope I don't end up in that underworld lol

I'd never heard of it. Sounds interesting.

This is, indeed, interesting, Adam...
as for the Chicken and Dumplings over at my place...I am not much of a meat eater, either, and I have always just picked out the dumplings and leave all the chicken to someone else. :)

I love it all the theoriés the right question should be, which is the right?
I am a Christian and I still have my doubts about hell.
xx

This is new to me.