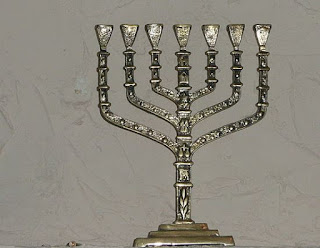 My mom got a religious-themed Christmas card one year with a picture of Mary and baby Jesus. I forgot how I mentioned it, but I did say something about Mary being Jewish. My mother apparently thought Judaism existed after Christianity. Thinking that they were a group of people who didn't think Jesus was the messiah. While Christianity has a different idea of a messiah than Judaism, it's pretty sad that someone could believe in one religion and gets a related religion's history so laughably wrong.
Posted by Adam at 2:00 PM

Being raised Catholic, it was awhile before I knew the Jews did not believe in Jesus in the Catholic sense.

"It's pretty sad that someone could believe in one religion and gets a related religion's history so laughably wrong" -- happens ALL the time!

Hmmmmmmmmm!
Weren't the 12 apostles all Jewish? Some of them were "credited" for writing
the bible.
I'm 72 years of age and I don't think I have ever met a person of the Jewish faith.
Anyhow here people don't pick their friends on religious grounds - that is pathetic
to be like that. I certainly don't ask when introduced - "What religion are you?".
B J Hunnicut aka Colin

All Christians are theologically adopted Jews! St. Paul was the one who first said that you don't have to be Jewish to be a follower of Jesus-

I would like to learn more about other people's religions.

Interesting that so many people conveniently forget that Jesus was Jewish.

In my early years, I didn't know much about any other religion besides Christianity.

We've got to cut mom a little slack;)

Oh yes always remember Jesus was Jewish and he always red in the Temple. But some people don't understand this.
Always thes ethings make me think I respect5 all religions and I believe in that.
And Im catholic :)

And Cloudia has reason I remember when Saint Paul talk about it :)

And Cloudia has reason I remember when Saint Paul talk about it :)

I so enjoy your funny stories, Adam! I can't remember when I first became aware of other religions, but I do know that my Baptist grandmother MacBeath was very concerned about my fascination with nun in a convent nearby. She thought Catholicism was another religion!