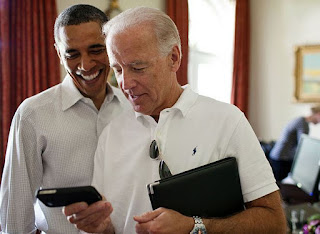 While there's nothing "official" yet, it does seem that strong reports are saying the Vice President will run for the Democratic nomination. I think it's all rather puzzling. I don't think he really has a real fan base, and I don't think he'll take serious numbers from Clinton or Sanders. He also waited until after the first debate to run which makes it seem like it's too little too late.
Posted by Adam at 11:55 PM

I don't think he'd have the numbers either.

Maybe he just got caught up in this and won't do it, after all.

I think he missed the boat on this one.

I remember his debate performance last time around. Cringe.

I don't think he should throw his hat into the ring.

I just heard he's decided not to run and it's probably just as well. He's had too many sorrows to deal with.