Kevin McCarthy No Longer Running For Speaker of the House 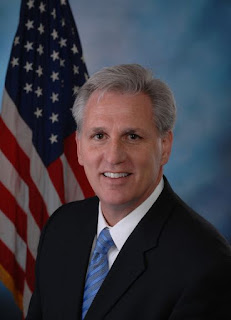 Kevin McCarthy is the House Majority Leader and was basically heir apparent to becoming Speaker of the House when John Boehner steps down at the end of the month. Except now he says he no longer wants the job. I really think it was because he angered his Republican colleagues by saying the honest truth about the Benghazi hearings. He basically said that they were all a political stunt to hurt Hillary Clinton's chances of becoming president.
Posted by Adam at 11:00 PM

God forbid - anyone from the Democrat side but not Hillary.
The Republican candidates so far are too frightening to even
contemplate and as for the likes of that fool Trump and that clot
who could be endorsed as a VP - Sarah Palin or anyone
with "Tea Party" links - the World trembles in fear.

Forecasting the end of the World might be easier DONE than anticipated.
B J Hunnicut
PS: Watch for creepy crawly ferrets to appear now - ha ha!

Yes, this guy screwed up by telling the truth.

I heard on the news this morning that the GOP may ask Mitt Romney to fill Boehner's shoes! Now there's a man to stand up for the ordinary person and deal with income tax issues like earned interest deductions for the wealthy! Go GOP go!