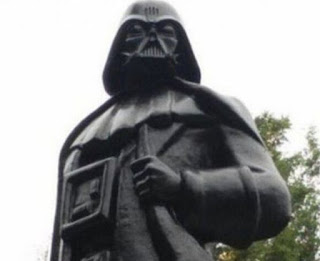 Ukraine recently passed a law to remove all symbols of communism/Soviet Union from the country in response to Russian aggression. Ukraine was part of the Soviet Union so there was a statue of Vladimir Lenin. Instead of tearing down the statue, they transformed it into Darth Vader from Star Wars. While I think the story is a little silly, I still think it's also cool that they changed into a Sith Lord.
Posted by Adam at 10:00 PM

Well that won't help in developments - with the shooting down of MH17 and recent
events, the Ukrainians who since time - ZOT, have never had any love of the Russians.
Certainly won't amuse Comrade Putin, eh?
B J Hunnicut aka Colin

That a little funny.

(I deleted my previous comment because it was badly formatted.)

Stalin would have made a better Darth Vader.

That is so hilarious!

I finally know who's behind the mask!

Oh my gosh! That is just too funny!