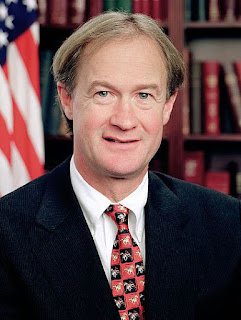 Lincoln Chafee never had much of a campaign to begin with and is the 2nd Democrat to drop out of the race after Jim Webb. The first debate was a bad night as he arguably did the worst of all five candidates. Now he's ended his campaign and I don't think anyone is really sad about it except maybe Lincoln Chafee of course.
Posted by Adam at 4:00 PM

Interesting politcial history. A middle of the road Republican and then became a Democrat!!!!
His policies noted from wikipedia seem sane and responsible, unlike that Trump person or a "Tea Party" member. The world trembles at that prospect of a US President of that ilk or anyone remotely associated with Texas!
Embassy row in Washington DC will have a lot of empty Embassies with countries
recalling their Ambassadors.
Surely somewhere in the USA, there must be a person from the Democrat side that
is a better prospect than Hillary??????
Buying the US Presidency just STINKS and that as far as I am concerned in not what the founding fathers of the USA had in mind.
B J Hunnicut aka Colin

We have a year before this all comes down..I would imagine several, on both sides, will drop out before too long.

Had to be a vanity campaign because he never had a chance at the nomination.