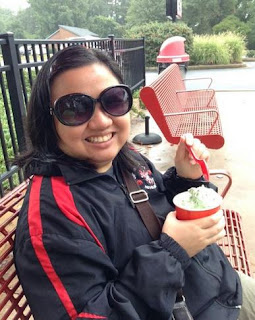 I decided to take my wife Daisy recently to a little ice cream placed called Brusters which would probably be unfamiliar to those who don't live on the eastern side of the United States. Daisy is pretty slow at making choices when it comes to menus but she wanted double mint chocolate chip without thinking twice about it. 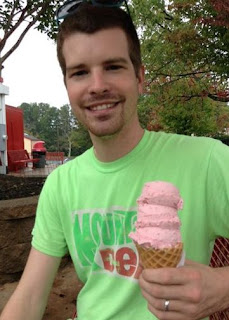 I got a cone with strawberry ice cream which is the first time I ever had ice cream with like three scoops on the same cone. I don't think I ever ate their ice cream before, but it was okay. It was easy to eat, but I thought at least the strawberry flavor wasn't as delicious as other strawberry ice cream varieties. It's also a place where you can't sit inside, so we sat on a bench. Luckily a few benches had umbrellas as it started to lightly rain as we got our ice cream.
Posted by Adam at 2:00 PM

Your ice cream looks so yummy, so does Daisy's.

I've noticed how you two like icecream. Lovely photos of you both.:)

I'm more of a yogurt girl myself, but Daisy's and your ice creams looked good:)

Interesting how different people are. Strawberry is probably my least favorite flavor.

Delicious ice cream. You are so cute together :)

My choice would have been the same as Daisy's. My favorite kind. In fact I'll be having some in a little while. : )

Ice cream is always the best. And so is spending time with someone you love :)

I just love your Daisy and how much you love her, too.

Great photos of both of you. :)

Love the photos of you and Daisy. Hubby and I occasionally go to the ice-cream store for a treat. I usually get pralines and cream. It's very rare that we buy ice-cream at the store but we did recently and got Friendly's Butter Crunch. It was way too good and went way too fast and that's why we don't normally buy ice-cream from the store :)

Your ice cream looks so good!

I haven't heard of this ice cream place, but it does look tasty!

Nice photos! I think Daisy made the right decision: nothing beats mint chip ice cream! Glad you had a good time going out for ice cream together!

She always looks happy with food.