NASA Has the First Good Picture of Charon 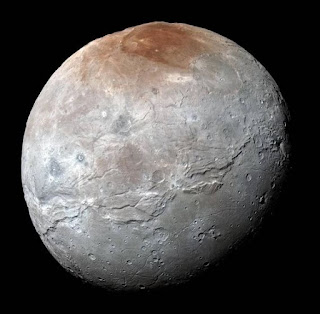 As I mentioned before with Pluto, NASA has recently taken pictures of planets on the far side of the solar system. We've known they've existed for quite some time, but like Pluto we've never had a real picture of them until recently. This is Pluto's (by far) largest moon Charon, and I think it's beautiful in its own way.
Posted by Adam at 8:40 PM

Email ThisBlogThis!Share to TwitterShare to FacebookShare to Pinterest
Labels: NASA

Love this picture. I never liked when they bumped Pluto off as a planet. Not sure if they've since put it back on or not. But wow, great picture of Pluto's largest moon.

Wow that is so crazy that it's a good picture of that moon!

That's a great image. I find all of this so fascinating!

Our universe is amazingly beautiful! thanks for sharing this, Adam!

That really is a great photo

Amazing photo, but it doesn't look like a place I'd want to live.

Incredible - looks like a huge mountain range (?) around the equator. Maybe.