Paul Ryan is Officially Speaker of the House 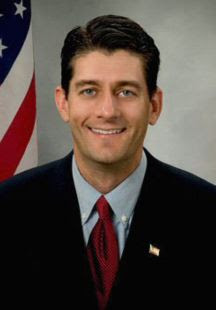 John Boehner has now officially resigned, and House Republicans have put Paul Ryan in power. I would say that I hope he'll work with President Obama and Democrats with compromises, but seeing how Boehner was "less conservative" I really doubt that will happen. I can see his House being much like the previous Houses of the 2010's, and that's a chamber of Congress that gets almost nothing accomplished.
Posted by Adam at 11:00 PM

I think we are all just hoping for something better out of Paul Ryan at this point. It doesn't sound like you particularly liked Boehner's time as Speaker; and though I'm from the other side of the political spectrum, I didn't think Boehner did a good job as speaker either. It will be interesting to see what we get with Ryan.

I will say I was sufficiently unenthusiastic about Ryan and Romney that I wrote in a candidate rather than vote for them [or Obama] last time around. Oh well, an old friend of mine used to say, "Hope to the end...even if you do die in despair." She was such an optimist...Let's hope Congress and the rest of government does not lead us to despair. Hope to the end, t̶h̶e̶ ̶c̶o̶l̶d̶,̶ ̶b̶i̶t̶t̶e̶r̶ ̶e̶n̶d̶. [oops!] :)

he has such a fake smile.

His father died of a heart attack at an early age. I hope this job doesn't kill him. See--I can be an optimist.

House Republicans would never forgive Ryan if he were to compromise with President Obama. I don't anticipate there being any change.

I'm not a Ryan fan..but I do wish him good luck in this new job.